Compatible with Windows 7 SP1 and newer.

yEdit2 is a simple text editor with frequent auto-backups and a countdown word counter.

It also includes a special .yedit2 file format, which is password-protected. You can put all your web logins, email accounts, etc in yEdit and then save them out in a password-protected file. (The contents of your files are not sent to, nor viewable by, Spacejock Software, and there is no magical backdoor to open your files if you lose your password.)

There's also an Android version on the play store, currently available in public beta, and an iOS version is on the way. Due to play store/app store regulations, mobile versions will not have file encryption.

In 2008, like every year, I used yWriter on my PC to keep all the bits and pieces of my Nano project together, and I bashed out my daily word count on the laptop. Unlike previous years where I wrote in Word or OpenOffice, this time I used a new tool called yEdit, which has a countdown word counter. (You put in 1700 as the starting count and start hammering out the prose until you see '0') I found it easy to set it up with 500 words and then type as quick as possible until I'd done them all. Music on the headphones helped, and Nano 2007 was the easiest I've ever done. 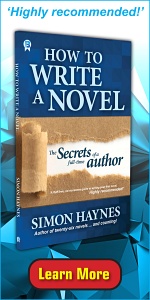